Hello everyone, I finally finished another book and let's just say, it wasn't what I expected. 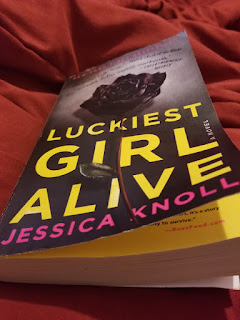 I choose to read this book because Reese Witherspoon raved about it, so I had high hopes for it. Side note: If you aren't aware, Reese Witherspoon has a booming online book club. Not quite as big as Oprah's book club but it's a big deal. So, I thought, why not choose this book?

Sadly, I was not impressed. The Luckiest Girl Alive by Jessica Knoll in my opinion, had too many characters to keep up with and it distracted me from the story. Many times, I found myself trying to remember who was who and I was even going back to old chapters to refamiliarize myself with the subject character.

After doing some research I found out that the book was sort of a true story about the author. The Luckiest Girl Alive is about this seemingly put-together girl named TifAni FaNelli who had a traumatic high school experience but has risen above her trauma and became successful as an adult. She writes for this popular women's magazine and gets to wear all the high end clothes the magazine uses for their models. She is also about to get married to this handsome wealthy man with the perfect last name. Her name, which was the last thing she had that reminded her of her past was about to change to Ani Harrison. Life couldn't be any better until her past started to resurface.

When she was a teenager she was raped at her friend's house by three boys from her high school and never could come to terms with what had happened. Because of the incident she became known as the high school slut and no one wanted to associate themselves with her anymore. This boy who was kind of a nerd, named Arthur soon became her only friend.

Later on in the story TifAni FaNelli tells us about a shooting in her high school. The shooter was a psychopath named Arthur. Yes, her friend Arthur. Arthur and TifAni had a mutual hate for Dean a bully to Arthur and one of the boys who raped her. Because of this, the community thought TifAni was a suspect but that was not the case. She had nothing to do with the shooting and tried to change the way people viewed her. She wanted everyone to see her as Ani Harrison.

The story just got a bit confusing because it switches from the present to the past often and introduces way too many characters that, I feel like, weren't even needed in the story. It was very all over the place and at times very boring.

I give this book 2 out of 5 stars. And that's because I'm being nice. On to the next book!