I had no idea Puerto Rico, a small island itself, had more islands. The thought just never crossed my mind. But I have fallen in love with one of Puerto Rico's little treasure island. And by treasure I don't mean gold, just memorable experiences. Culebra is nearly 7 miles long and 5 miles wide so it’s very tiny. In September 2017 they were impacted by two intense hurricanes Irma and, about two weeks later, Maria. The island lost its power and was destroyed. Tourism was always one of the greatest incomes for locals on the island but since the hurricanes, the tourism market took a dip.

On August 28, 2018 I had the pleasure of visiting this wonderful island. The locals had high spirits and seemed grateful for lives. Till this day the island still has no electrical power but with the help of two huge running generators the islanders are getting some relief. The only way to get to the island of Culebra from the mainland is via ferry. The ferry ride is about 2 hours long with a scenic view of Puerto Rico's other smaller islands. Yes, there are even more islands!

I did an excursion with "Kayaking Puerto Rico" while on the island. This excursion was called "Aquafari Culebra Island". The tour involved kayaking and snorkeling during the day on the Tamarindo Beach, a beautiful beach with clear glistening water.

I don't know how to swim so this was a challenge for me. But don't worry I wore my life vest and made sure it was tightened correctly before heading to the water. I have successfully gone kayaking before, so I wasn't too nervous for that, but the snorkeling part was intimidating. I have tried snorkeling before and totally panic when I looked into the water and realized there was no ground beneath my feet. With my heart caught in my throat, I had to tell the tour guide to take me back to shore and ended that snorkeling excursion. I regret it so much because snorkeling from what I was hearing is a beautiful experience. So, on this trip, I was determined to face my fears and give snorkeling a second chance.

The sun was out shining bright with just a few dark clouds in the distance. The tour started on the kayak. After paddling for about 30 minutes to the area were the coral reefs began, your arms do get tired, but your surroundings make the paddling trip worth it. Once at the coral reefs the tour guide, Rafael, told the group to put on the flippers and snorkeling goggles. It was time to start snorkeling! It took me a few minutes to calm myself before jumping into the water with my snorkeling gear. I tightened the goggles and put my feet into the flippers. By this time, it started to rain. Great, this was going to make things harder, I thought as the cold water touched my skin before the ocean water had a chance to. The raindrops distorted my vision a little, but I wasn’t going to let that stop me from getting into the ocean. I swung my right leg around followed by my left leg and slowly lowered my body into the ocean. Thanks to my life vest, I floated in the water. So far so good. I bit the mouth piece of the goggle and looked into the water. Since I knew that I was going to see no ground beneath my feet I didn't panic as much. It took a while for me to get use to biting the mouth piece of the snorkeling mask without swallowing any water. Every time I bit into it and put my face in the water I tasted salt water and felt as if my air supply was decreasing. Something didn’t feel right. And then I figured it out! The mouth piece was backwards. That explained a lot. Once I achieved breathing through the tube without swallowing any of the salty water I was literally like another fish in the ocean. I was turning in the water, swimming without using my arms, heck I was evening floating backwards at one point. 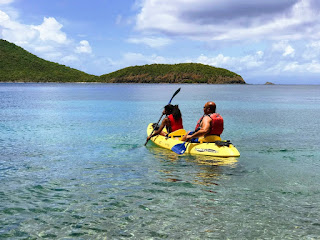 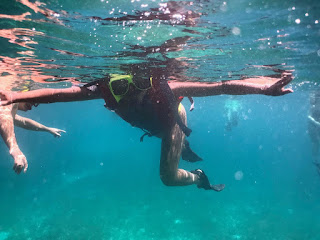 The view beneath my feet was remarkable. I saw schools of fish and fishes that looked like Dory from "Finding Nemo". There was even jellyfish swimming around but since I was too scared to get stung, I swam away from the area were said jelly fishes were instead of looking at them. In another area there were sea turtles. They were so cute! One was swimming right below me while another one popped its head out of the water for a breath. They were huge and swam gracefully along the coral reefs looking for food. After about an hour of snorkeling we headed back to the kayaks. Climbing back on the kayak from the water was a bit of a mission that require some upper body strength but with a few tries I managed to climb back up. 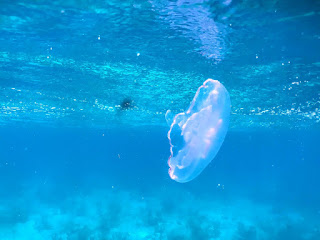 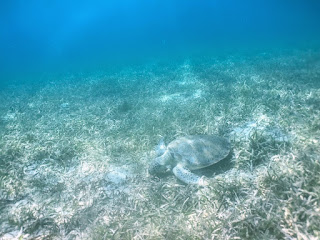 The tour guide took some pictures of us and of what we saw during the tour and later sent us a link via email to access the pictures. After the tour we went to Flamenco Beach, a world-famous beach. The sand was white and very soft. It felt as I were walking on dough. Seagulls were flying, and you could see a green mountain a few miles away. The view was like looking at a post card. 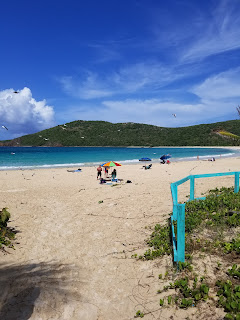 There was an area with sheds were people were selling food. Most shops were closing early because it was a slow day. And the few shops left opened only accepted cash. Luckily, I had 20 bucks on me, so I was able to buy some food for my friend and I who only had card. I ate lobster empanadas with a very spicy green sauce. It was delicious!

Going to Culebra was such a humbling experience. Seeing people who have lost everything but continue to have a smile on their face is admirable. The tourism is very low, and I wanted to write this post to inform everyone about what's going on and hope that more people go visit. They need the tourism and you'll have fun. Trust me, the memories you'll make are priceless.

Other ways that you can help support this island and Puerto Rico is by donating to betterpuertorico.org

If you would like more information on the excursions go to kayakingpuertorico.com